Written by Pierre Felgines
on September 14, 2017

Coordinators and Back Button

This article was first published on Fabernovel blog.

To build modulable and easily maintainable iOS applications, we decided to use, at Applidium, a custom iOS architecture, adapted from the Uncle Bob’s clean architecture. One of the biggest challenge, in that process, was to separate the view, business and navigation logics from view controllers. The view and the business logics are isolated and decoupled from the view controllers thanks to view contracts, presenters, interactors and repositories, mostly. The navigation part is done through Coordinators. Coordinators take care of presenting and dismissing view controllers, handle the application workflow and are organized in a tree hierarchy standing in parallel to the view controller’s one.

Coordinators grow with the application

As the application complexity increases, coordinators handle more and more logic, mostly when screens are accessible from different places. This leads to coordinators implementing a lot of navigation delegation protocols (schema 1). 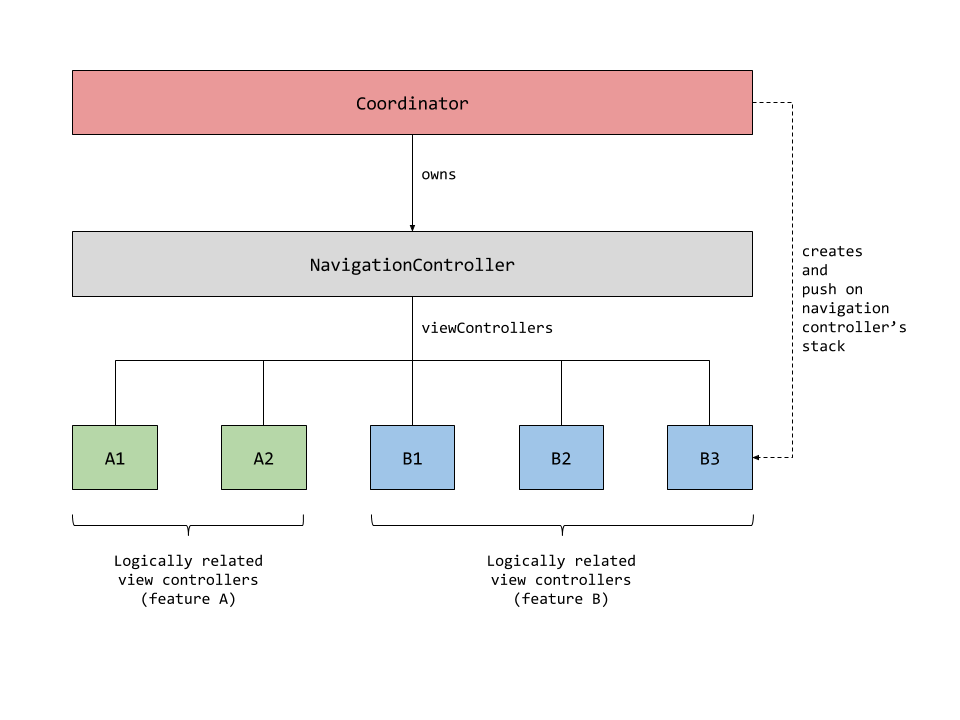 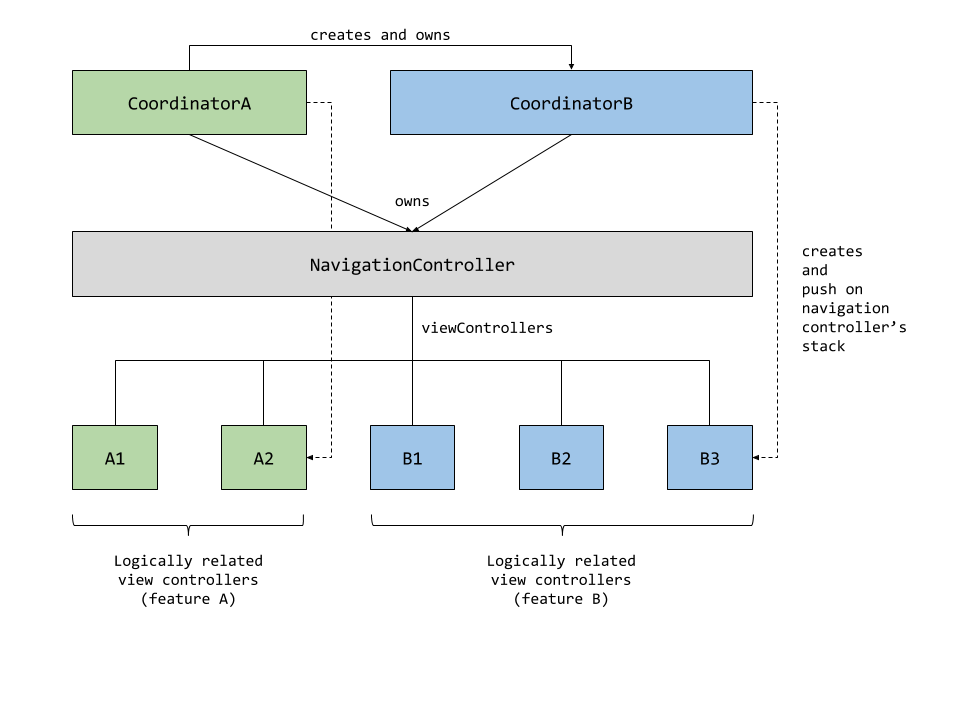 As stated in this article, this leads to issues when the user taps the back button because the action is handled by the system and the back button was not created in our code. It’s then difficult to track which coordinator should be alive and to proceed to our regular bookkeeping. In the same article, Soroush Khanlou provides some interesting solutions about this problem, that we will challenge before proposing another solution that better suits our needs.

This is why we decided to work on our proposition to deal with those issues. The idea was to build a mechanism easily and optionally usable that is as invisible as possible from the outside of the “I need to stack coordinators for a single navigation controller” scope.

To sum up, here are our requirements:

Let’s see the final API in a simple example, before digging into the details.

The interesting part is the line navigationControllerObserver.observePopTransition(of: detailViewController, delegate: self).

Indeed the DetailCoordinator is in charge to create the detail view controller, to push it into its graphic context (the navigation controller) and to notify its parent that it has been dismissed.

The navigationControllerObserver has a method to observe the pop of the detailViewController so that we can be notified.

The first thing to do when we want to track navigation controller operations is to use its delegate property.

Then we want to register a delegate to a specific view controller to observe. When a view controller is popped, we will find its associated delegate, and if it exists, notify it of the transition.

The first thing to note here is that we need to wrap the delegate into a NavigationControllerObserverDelegateContainer to store a weak value and avoid a retain cycle.

Then we find the delegate to call and let it know about the transition.

That’s all it takes to register multiple delegates, each per view controller. For now we have achieved the followings:

Objective-C to the rescue

The last requirement we got, was to allow the use of custom transitions for push or pop operations. These custom transitions are handled by the navigation controller delegate, that is already in use in the NavigationControllerObserver.

We can argue that using Objective-C dynamic features is not the right solution. For our needs it works pretty well because it stays hidden in this particular object, and allows the outside world to provide navigation controller delegate method implementations.

What did we accomplish ?

Finally, let’s see the code in the MasterCoordinator that creates the DetailCoordinator.

All our work has been done to have a chance to call removeChild(coordinator) and release the coordinator that is not in use anymore.

Here is a visual representation of the different objects in play: 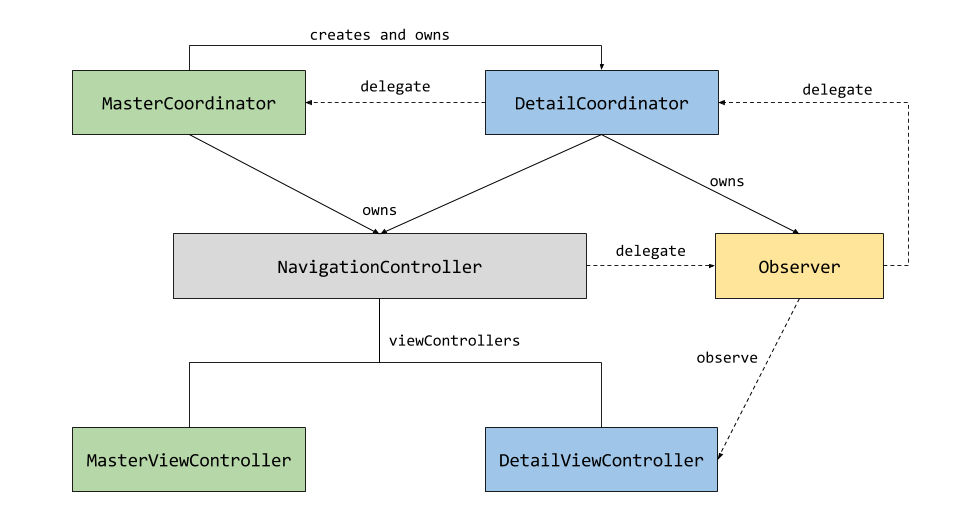 Our solution is not a perfect one, but we take a slightly different approach from the two other solutions that were proposed in the Soroush’s article. We hope these series of articles will help people use Coordinators, because it’s a great tool to extract navigation logic out of view controllers. You can find the full gist here.

A special thanks to Benjamin Lavialle, who helped and contributed to this blog post.